Admit it - you were expecting a part-built model, not a building site!

The King needs a new palace, so has employed workmen to build it. 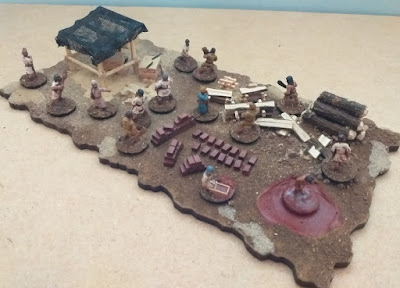 Scratchbuilt from all kinds of odds and sods, I mean from the finest Cedars of Lebanon and Jerusalem Stone, as usual on a Sarissa base.

Brickmakers are a converted Essex Arab civilian and a Blue Moon African villager with a Peter Pig Viking head.

Timber from my garden. 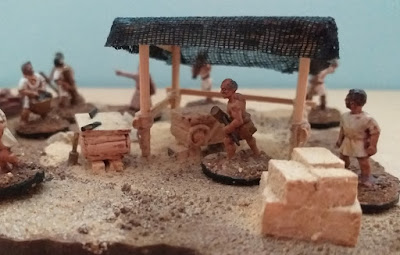 Stone waste pile from Salisbury Cathedral workshop via a rockery I used to have.

Proto-Ionic capitals are cast in resin from a master I made from styrene and brass rod.

The mason is another converted Xyston Athenian rower.

Remaining figures from Essex and Xyston.

All Along the Watchtower

Another Biblical building, this time a watchtower. Used for looking out over fields, olive groves and vineyards, to ensure the security of the crop and the enthusiasm of the workforce. 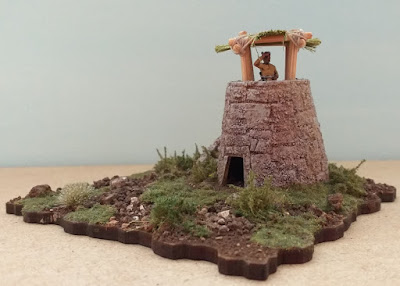 Built from thick greyboard with blocks made from thinner card plastered with PVA and sand. 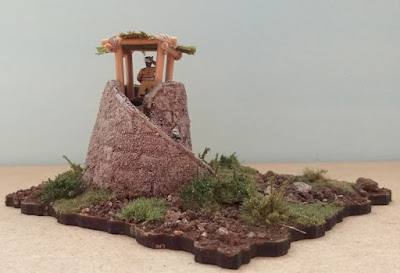 The lookout is an Arabic civilian from Essex and the Hoopoe is a OO scale woodpecker with a cigarette paper crest. 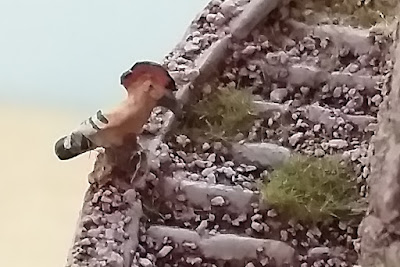 Bushes are from Tajima1 Miniatures. 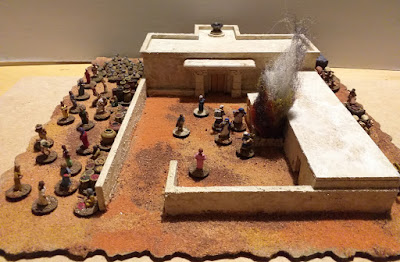 The latest building for my 15mm Biblical settlement – a temple based on the one excavated at Arad. 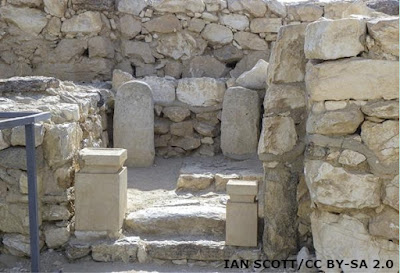 Although ostensibly a temple to YHWH, the god of the Hebrews, it has two massebot (standing stones) in the holy of holies, thought to represent male and female deities. The two incense altars are of particular interest. On both were found residue from the burning of ‘incense’. On one frankincense, and on the other hashish. My building has no windows for a reason… 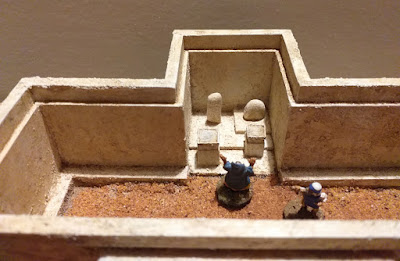 The enclosed courtyard includes an altar of burnt offering… 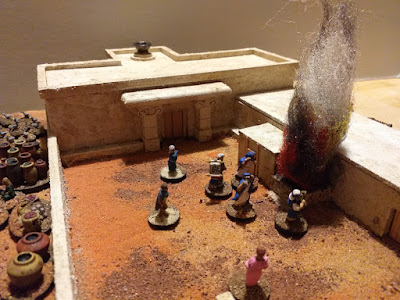 …and to one side is a market. Eventually I’ll make some shelters/canopies for the traders. 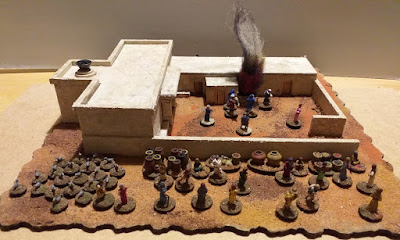 It is entirely scratch built from 2mm mdf on a base from Sarissa Precision. Multi coloured sand on base is from the Negev Desert via eBay.

Priests lightly converted from Xyston Maccabean rabbis. Other figures are from various places, including Museum, Blue Moon and Forged in Battle. The geese are from Minibits.

Jars and baskets are from Baueda and Crom’s Anvil or made from beads and jump rings.

The beacon on the roof is made from metal button and acrylic bases, but really it’s a handle with which to lift off the roof. 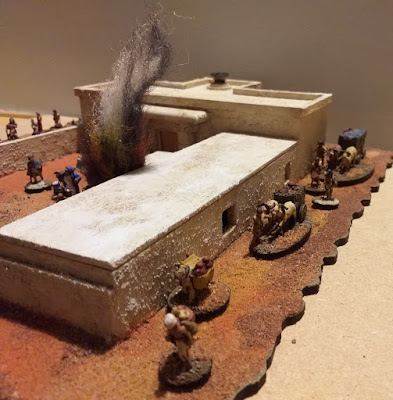 Another Threshing-Floor and an Altar to the Detestable God of the Ammonites.

First an earth altar to the God of the Hebrews, as built by David in 2 Samuel 24 on the threshing-floor of Araunah in Jerusalem, later to become the site of the Temple of Solomon. 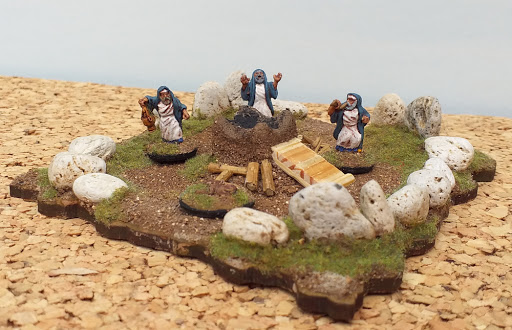 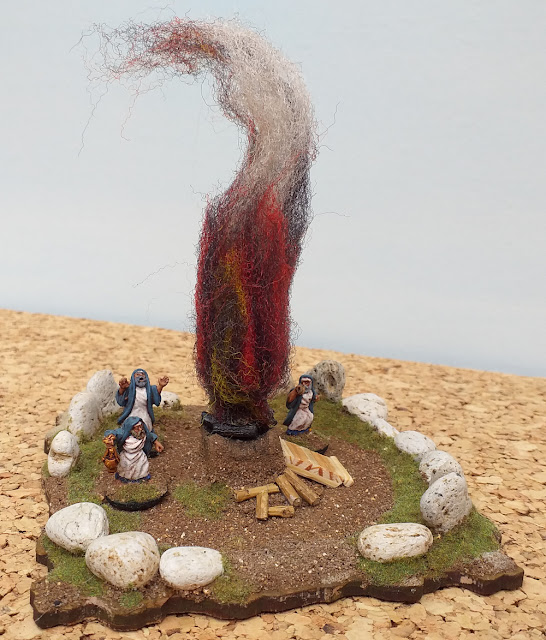 Another view whilst the sacrifice is being burned. Fire is stuff I bought yonks ago from Gale Force Nine. 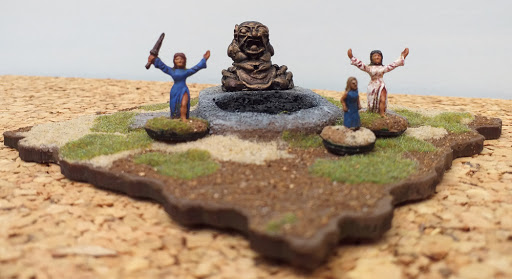 I'm not at all sure where these figures are from, the priestesses may be from Donnington. The idol is an ancient Citadel model. 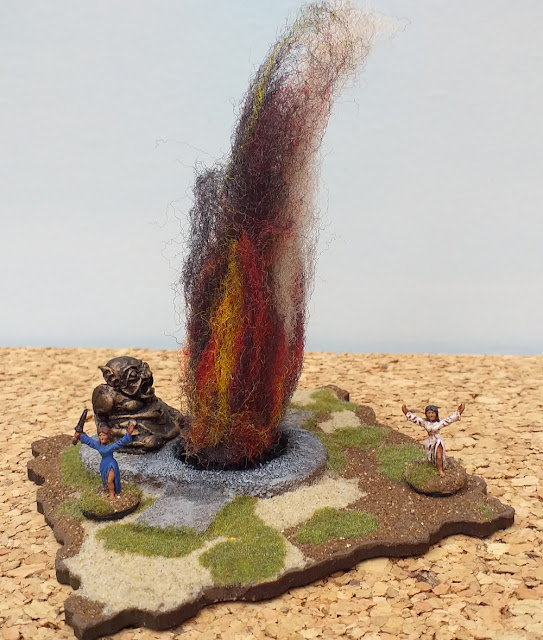 As always offerings must be burned so that the (Detestable) gods can smell them...

“Tonight he will be winnowing barley on the threshing-floor.” Ruth 3:2

Additions to my Biblical town. A granary and threshing-floor.

Built on interlocking tiles from Sarissa.

The granary is from Acheson, bushels from Baueda and the corn stooks are N gauge model railway accessories from P&D Marsh. 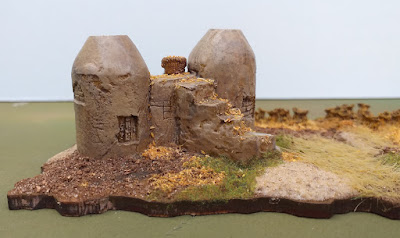 The men and oxen from I-can’t-remember, weapons replaced with wire pitchforks and whip. 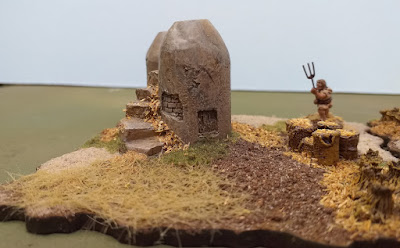 The gent with the oxen is standing on a scratch built green stuff threshing sledge, which is completely concealed by the straw, grain and chaff on the floor! 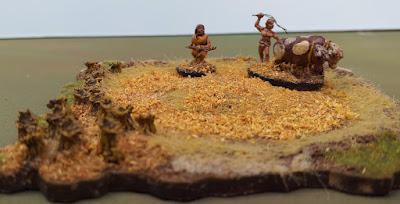 "Go throughout the tribes of Israel…and enrol the fighting men…”

I was bored yesterday, so I lined up my little Hebrews and photographed them.


The army was started sometime after I saw the film "King David" (1985), and initiated my move to historical gaming from fantasy. The army has grown, bits have been repainted, rebased and/or replaced. The majority of the figures are Chariot Miniatures, either in their original incarnation or the born-again Magister Militum version, but there are bits and pieces from many other manufacturers. The slingers, for example, are a mixture of Minifigs and Xyston.

The King's chariot, left of centre, with horses for some reason in West Ham colours, is gold leafed. 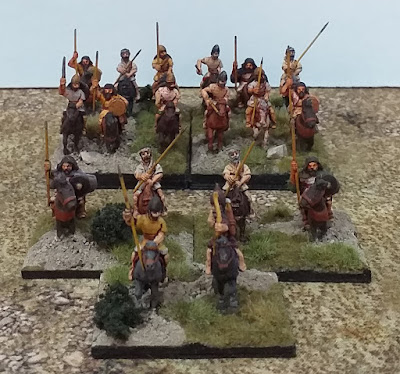 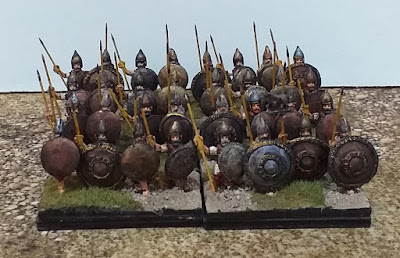 The chap with the bright shield is Uriah the Hittite, before David nicked his wife.

The waggons are filled with Eilat stone, copper ore  from the alleged site of King Solomon's mines.

Tents from Baueda. All of my armies/collection include birds, preferably gallus species, hence the cockfight.

The unfortunate chap hit by the wrath of God is a wizard's victim from Peter Pig.

To add authenticity the dirt and stones on the bases is from Megiddo. (OK, it adds nothing but, in my head at least it's cool!)

The latest additions to my Biblical settlement.
All are scratchbuilt from 2mm mdf and/or greyboard, with interlocking bases from Sarissa.
Firstly an apiary based on one excavated at Tel Rehov, Israel:

The space at the end can accommodate the anachronistic Sumer Bar and Grill; beer drinkers from Eureka, barbie from Museum.

Not everyone likes beer (I know!) so here’s a winery, loosely based on one at Ashkelon: 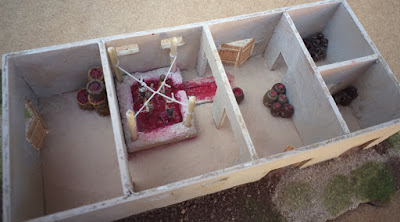 Grape treaders from Magister Militum, jar carrier from Forged in Battle. Jars and baskets from Baueda.


A row of shops, with workshops behind and accommodation above, again loosely based on archaeology at Ashkelon: 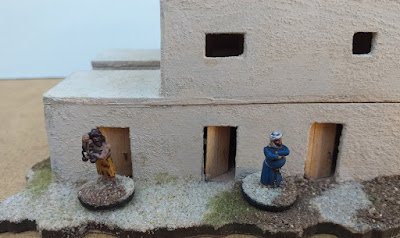 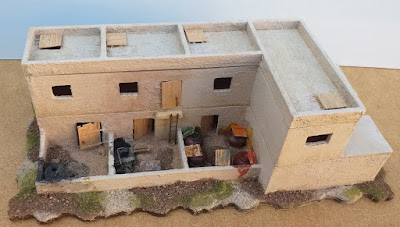 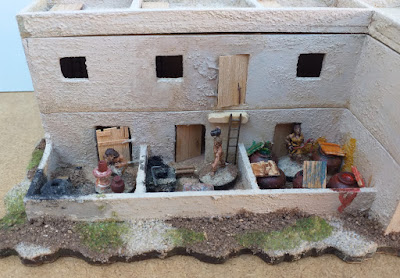 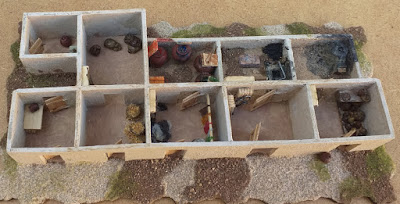 Pots from Baueda and Essex. Note the Biblical bog at top left. The one it is based on was in a gatehouse at Lachish.
Finally, the other side of the street: Weaver yet another conversion from a Eureka Sumerian, leather worker and basketmaker converted from Blue Moon Celts, greengrocer a Forged in Battle Roman civilian.

Baskets in rightmost shop from Baueda, everything else scratchbuilt.